Call Klamath Valley Botanicals for a sample of Klamath’s Best® Blue Green Algae to enhance your products with what the National Academy of Sciences considers to be the most nutrient abundant food source on our planet!

A powerful, balanced, vital food, which is pristine, wild and naturally pure…
Does a place still exist where such a foodstuff grows naturally?

Klamath Lake, Oregon – One of the most geologically active regions in the world, a guarantee for mineral content. 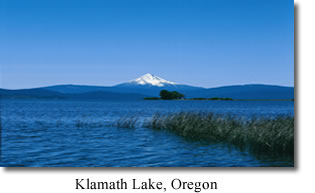 Indeed there is such a place: Klamath Lake, in the Pacific Northwest of the United States, in the South central portion of the State of Oregon. This pristine river valley, home to an incredible number of wild flora and fauna, covers an expanse of approximately 97 square miles at an elevation of 4500 ft. Klamath Lake is a large slow moving river transporting water from Crater Lake. Klamath Lake never stops moving allowing the water the opportunity to constantly replenish itself with life giving oxygen. The source of Klamath Lake water, which flows all the way to the Pacific Ocean via Klamath River, is one of the clearest and purest bodies of water found in North America. The pristine waters of Upper Klamath Lake come from more than 17 natural springs and a watershed of nearly 10,000 square kilometers including Crystal clear mineral springs fed underground from Crater Lake and snow melt from clear snowcapped volcanic mountains via the “Rivers of Light” 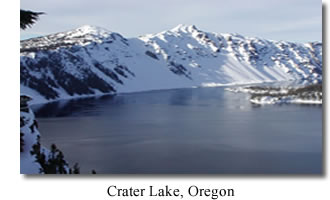 Crater Lake, Oregon – Only the perfect natural ecosystem of Klamath Lake offers the unique algal species the habitat that it needs to flourish. This unique algae, called Klamath Blue Green Algae (also known as AFA, Aphanizomenon Flos-Aquae), is a Cyanobacteria. Cyanobacteria are among the most ancient life forms, estimated over 3.5 billion years old. Blue Green Algae was the very first organism to achieve photosynthesis. Using solar energy it split the water molecule, produced the first carbohydrate and released oxygen. This was made possible by chlorophyll, the green plant pigment that is present in abundance in Klamath Blue Green Algae. Together with phycocyanine, the blue green pigment, it enabled the Blue Green Algae to absorb the entire spectrum of light and transform it into nutrients. 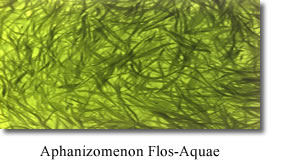 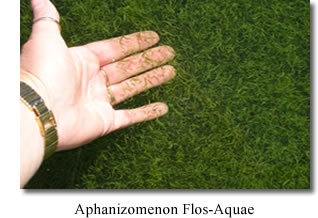 The first reason is the trace mineral content of the clear cold water of Klamath Lake. Aphanizomenon Flos-Aquae blue green algae require a rich source of minerals to flourish.

National Geographic (May 1998, Vol. 198 Num.5) called the region around Klamath Lake Cascadia and considered it to be the most active geologic region in the world. The ceaseless movements of the tectonic plates along the West Coast of the United States render the Cascade Mountain region very unstable geologically. The proliferation of volcanoes in this area (no fewer than 17 volcanoes in 400 miles) clearly demonstrates the geologic activity of the Cascades area. 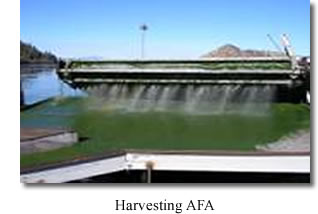 The volcanoes in Cascadia are also considered very young geologically in that they were all formed in the last several hundred thousand years. Mt. St. Helens is in this region and you may recollect that is was very active in 1980. This recent geologic activity has brought a host of minerals to the surface of the earth in a jagged high altitude configuration. Snow, ice formation, rain and time have broken these recent formations down into trace minerals that are then transported by creeks and rivers to lakes and reservoirs. Klamath Lake is one of these trace mineral recipient reservoirs. 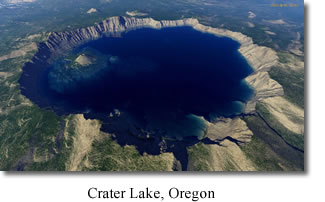 The second reason why AFA is so plentiful in Upper Klamath Lake is the abundant source of ever-moving, pure, high pH water. Snow and rain falling on the mountains surrounding Klamath Lake not only bring minerals to the lake but they bring a clear pure source of water which drains through Klamath Falls down the Klamath River all the way to the Pacific Ocean. Nowhere does it stall.

There are several unique geographic factors affecting the natural production of AFA. In other words there is no other place in the world that has all the factors below except Klamath Valley. And thus far, AFA, Aphanizomenon Flos-Aquae has resisted all attempts at cultivation.

Latitude – Klamath Lake is far enough north that it experiences long summer days and short winter days. The angle of the sun is very low in the sky in the winter. As such, the sun’s rays cannot penetrate into the water to provide energy for photosynthesis. AFA Klamath Blue Green Algae is able to remain dormant in the winter.

Altitude – Klamath Lake is 1300 meters high and this allows for a great deal of temperature changes. With cold winters and cold fresh water throughout the summer months AFA grows abundantly.

Fresh Water – Crater Lake is the purest source of water in North America. Situated at 7500 ft. and approximately 30 miles North of the lake, this water is the primary source of water for Klamath Lake.

Thermal Units – Klamath Lake has 300 days of sunshine per year. AFA converts the sunlight into bioavailable units through photosynthesis. 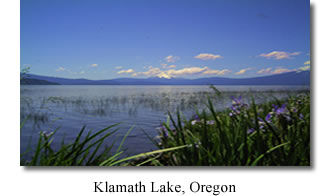 From this bountiful geographic region comes the most nutrient abundant green food source on our planet. Klamath Valley Botanicals, LLC has been harvesting and processing Klamath’s Best® since 1987. To assure that we produce only pure Aphanizomenon Flos-Aquae we have implemented a thorough quality control system.

Klamath Lake blue green algae has been shown to be very nutritionally dense, diverse and absolutely non-toxic. It is a unique single cell organism that has characteristics of plants, animals and bacteria. Like plants, it has chlorophyll and through photosynthesis produces oxygen. Like bacteria, it has a fragile cell wall. Like animals, there are times when it uses oxygen and produces carbon dioxide. In Klamath’s Best® Blue Green Algae nature has created a formulation that is almost perfect for humans that offers an abundance and complexity of bio-nutrients that could not be duplicated. 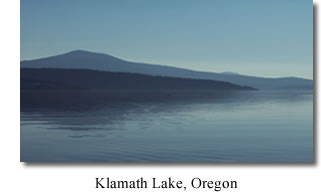 Specifically, Aphanizomenon Flos-Aquae contains more than 20 antioxidants, 68 minerals and 70 trace elements, all amino acids (essential and non-essential) and important enzymes. In particular, it is the high nutrient density and the synergistic effect of the trace nutrients that it contains that makes the AFA blue green algae the ultimate superfood. It offers a maximum of important micronutrients while simultaneously a minimum of calories. 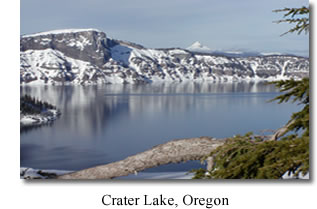